The Birdie Boys next outing will be on Sunday 20th August to Wernddu Golf Club for a singles stableford.  More information about the winners special prize will be provided in due course.  Wet weather is a strong possibility so make sure you bring the appropriate gear to keep warm and dry.

Caldicot Male Voice Choir has a vibrant Golf Society captained by enthusiastic chorister Alyn Dawe who took over the reins from David Gould last year. There are regular events held at local courses such as Wernddu, Dewstow etc. plus an annual trip to the Ashbury Manor in Devon for the tour.

The Birdie Boys have a new logo.  This appears on their new golf shirts and other material and also features on the Event Gazebo.

I don’t know who the model for the caricature is. Any guesses? 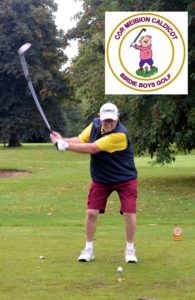 Hole in One? See those flying pigs!

You Raise Me Up, so I can stand on mountains!

They won’t give me my ball back, Mum. Wah!

John Wyson wants to go home! 27 over par on the first hole!

The Club also holds an Annual even and tournament at the St Pierre Golf resort near Chepstow to raise funds for the Choir’s designated Charity.  Last year’s event was in aid of the South East Wales branch of the Motor Neurone Disease Association and raised just about £1000.

Photos by Lyn Gauntlett.  Left click on images to enlarge

The Adventures of Billy Bunker Click here to read about him.

The choir has a very sociable group of golfers of all standards who have recently returned from a five day trip to the Ashbury Hotel golf complex near Exmoor, Devon.  This is the third annual pilgrimage the Birdie Boys have made here and a resounding success it was again, with good weather (only one day not so good), fine food and a very social atmosphere.

If you enjoy singing and play golf  join the choir and team up with the CMVC Birdie Boys on an outing soon.

In 2008 I decided to take up golf at the tender age of 63.  My friend and Choir Vice President Phil Cody and I visited and played on many local golf clubs for the first 6 months before deciding which club to join. We chose Blackwood because it was roughly halfway between our respective homes in Tredegar and Newport.

I knew a few Choristers played golf and we enjoyed a game or two as guests of  Tom Hole and John Wyson at their club at Dewstow. It then transpired that there were other golfers in the Choir, some who played regularly and others who only had a game occasionally.

In 2009, Phil and I decided to try a short golf break, and on mentioning it to Leon Jones and Roly Bennett, with whom we occasionally had a game, they expressed a desire to join us along with Tom and John. So it was that the six of us spent 4 days (3 nights) at the Ashbury Golf Hotel at Okehampton in Devon in the March of that year. We had such a great time that we vowed to do it again the following year.

It soon transpired that besides regular and occasional players there were quite a few who had played a bit in the past and a couple more who just fancied having a go. We tried a ‘Golf Day’ at Dewstow one Sunday where about a dozen turned up. It was such a success that everyone thought we should do it again and indeed make it a regular event every few months, and so it was ‘ The Birdie Boys ‘ came into existence.

At the beginning of 2010 Phil and I left Blackwood and joined Wernddu Golf Club at Abergavenny. Since then the ‘Boys’ have had many good ‘Golf days’ there where we play a 18 hole fun competition followed by a meal.

Our numbers for the trip to the Ashbury in 2010 had grown to 12, and our stay extended to 4 nights. The Hotel is superb with over 300 guests at any one time and it has 6 full size 18 hole courses within its 600 acres. It boasts the largest fleet of golf buggies in Europe at over 350! In our spare time we take advantage of the huge array of other sports and activities available. All of these activities are free to residents, and of course there’s a well stocked bar.

I had instructions that I must organise another visit again in 2011 and we duly arrived in April, this time with our numbers up by now to 20.  I must point out that although most of us are Choristers, there are a few who are Vice Presidents or friends. Again we had a wonderful break with good golf and a lot of laughs. In fact some who had come for the first time came up to me as we were having our final lunch before leaving for home and offered to give me their deposits for 2012.

I believe ‘The Birdie Boys’ have been a good thing for our Choir. We never arrange any event or game without first checking the Choir diary. We have gained a few new Vice Presidents and sold extra tickets for our Annual Concert. The fun and camaraderie is great, whilst we never forget we are ambassadors for Côr Meibion Caldicot and wear the badge proudly, even on the golf course. None of us are a danger to Tiger or Rory, and we don’t take it too seriously, so if anyone would like to join us you will be made very welcome.  Don’t worry about the gear, we have a spare right hand and a spare left hand golf set for anyone who would just like to have a go.

This site uses Akismet to reduce spam. Learn how your comment data is processed.